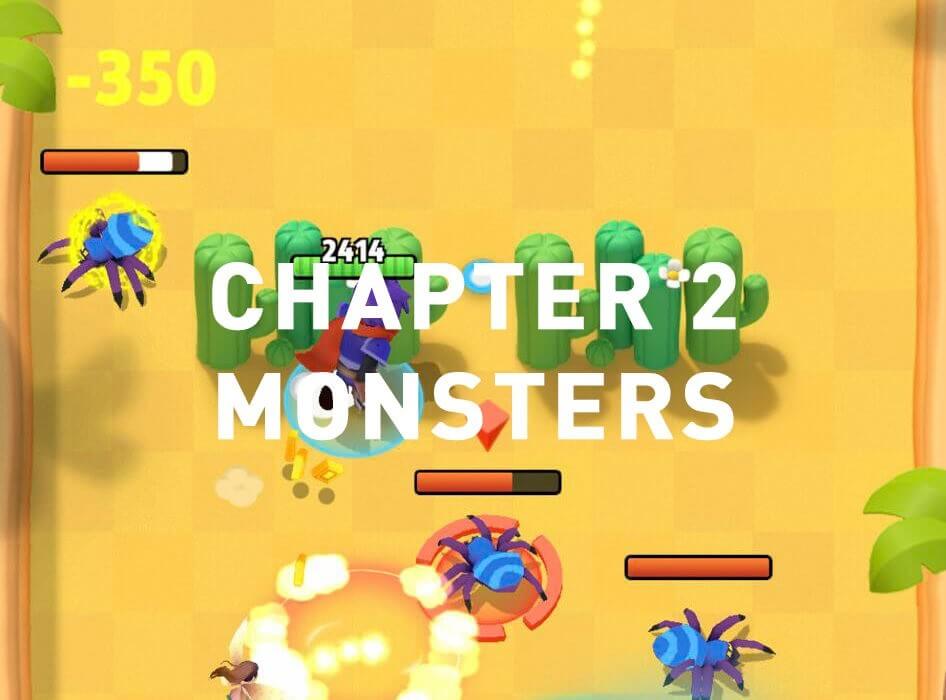 Complete list of all Chapter 2 Monsters, Bosses guide in Archero and how to deal with them!

They usually hide underground, rise and fire three red projectiles with small spread then they burrow down again. After they pop up, they will stay still for a little moment then shoot you in the current position. In able to dodge this, you just need to let them aim at you, move a few steps to the side and start shooting them.

They move fast but move only in straight lines (any direction). Their movement is quite hard to predict (They can aggressively move toward to your position after seeing you, but it just a little bit before they are getting distracted like stopping or moving somewhere else) so you need to keep a distance from them, and you will be fine.

They are like archers in chapter 1, immediately aim at you at the beginning with red lines and then fire fast projectiles. But they can’t track you, so it’s easy to dodge their attack.

(Range Attacker): Very interesting one, their projectiles move in a zigzag pattern and fast so they can’t outrun them, just need to move up and down to dodge. Or you can stay behind the wall since tornado would disappear after hitting the wall.

(Melee Attacker): They have fast movement speed. After getting close to you, they will stop for a moment and then charge toward you. So, always moving around them or try to stay away from them as far as possible.

(Melee Attacker): This one has no special ability rather than a normal attack, but they can be very annoying by keeping chasing you until they are all dead. So just need to play shoot and run.

(Range Attacker): They are quite tanky and fire flame once they lock on you. The key here is to stay as far from them as possible cause their flame has a limited range, and it can go through wall and water.

(Range Attacker): They are quite dangerous when you are distracted by other monsters, they like to keep a distance from you and throw a firebomb toward you. If you get closer to them, they will quickly throw a bomb, and their attack hurts. So you need to keep moving, try to kill them first if you can.

(Range Attacker): This one is very easy to deal with. It always stays at the center of the map and doesn’t move, and its attack is to place little yellow lightning circles randomly around the map. You can stand in inside a tower since they didn’t deal collision damage.

(Melee attacker): This boss will move around you, once you dealt a certain amount of damage it will split into multiple spiders. Its attack is firing a circular spray of slow red projectiles, so its easy to dodge if you keep a distance from them.

(Melee Attacker): Just like in chapter one but this time we have two. Just need to focus on smaller owls and avoid corners.

(Range Attacker): It bigger than the normal one and fire four tornadoes toward you. The trick here is to stand in a corner, left or right up to you, and you will able to dodge most of its attacks.

(Range Attacker): It has four types of attacks:

It is the final boss. It has three types of attacks:

Hopefully, you have found this Archero Chapter 2 Guide helpful. If you have any question, please comment down below!

Best tips for defeating all 50 stages of the Archero Chapter 5 with ease! Some Helpful Chapter 5 Tips Invincibility:...
Read more

I really want to post this Archero Chapter 1 Guide to share some experiences with new players who were...
Read more
Subscribe
0 Comments
Inline Feedbacks
View all comments