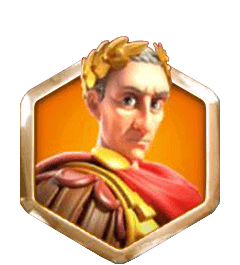 Julius Caesar is one of the strongest and easiest to build up during the early game in Rise of Kingdoms.

Looking for the best tips and talent tree builds for him? You will find this article helpful!

This skill reduces the damage taken by Julius’s troops. If Caesar’s troops have been reduced to 60% or less, he will have a 10% chance to reduce even more damage taken for the next 3 seconds whenever his troops are under attack. However, the effects of this skill can only be triggered once every 5 seconds

This skill provides Caesar a 10% chance to reduce the amount of his enemy defense per turn while attacking other Governor’s cities. This effect lasts for 3 seconds.

Increase maximum troops capacity by an amount of % base on level of the skill.

Ahead of his time – Expertise skill

How should I use Julius Caesar?

If you want balanced DPS and Tanking

If you want to to do more rallies on cities

When pairing with nukers, Caesar have to be in primary position, so that when on the battlefield, the bonus damage from his passive skill can applies to the nuker’s active skill.

Caesar can be either primary or secondary

There are currently 3 best ways to build up the talent trees for your Caesar!

Julius Caesar (100 BC – 44 BC), was a Roman statesman and military general who played a critical role in the events that led to the demise of the Roman Republic and the rise of the Roman Empire. He came from a noble family, he undertake many jobs: secretary, judge, executive, supervisor. In 49 BC, he led the army to conquer Rome, taken over Pompeii and set up a new dictatorship. Soon after, in 44 BC, Caesar was assassinated. In Rise of Kingdoms, Julius Caesar is a very beloved commander amongst the players. Down below is the basic guide to get the most out of Julius Caesar.