Home Rise of Kingdoms What Are Barbarians Camps and Keeps?
- Advertisement -

The Barbarians Camps and Keeps are the new addition of the Rise of Kingdoms which just have been added to the game by the developer which may confuse you about what is this, how does it work or what is the benefit it will bring to your kingdom?

On every zones of the map, the barbarian camps can be found nearly everywhere on the Rise of Kingdom map. But be careful, do not underestimate them and let your troops be defeated because they are much stronger, tougher, and more powerful compared with the regular barbarian. This fact is really easy to see because they have the whole fortress with a big army to protect them with all kinds of small armies like wolves, brutes, and many advanced armor or weapons to defend them from your armies.

If you have the intention to defeat these camps, I have a small suggestion for you is that you should upgrade your troops to tier 4 first. Remember to upgrade your troops and commander as high as possible because you will depend on them in order to compete against the barbarian brute. Later, in this guide, I will go into details of what is a barbarian camp, what is their benefits and how do they operate in Rise of Kingdoms.

Now, let’s not delay anymore and go straight into the details, shall we? 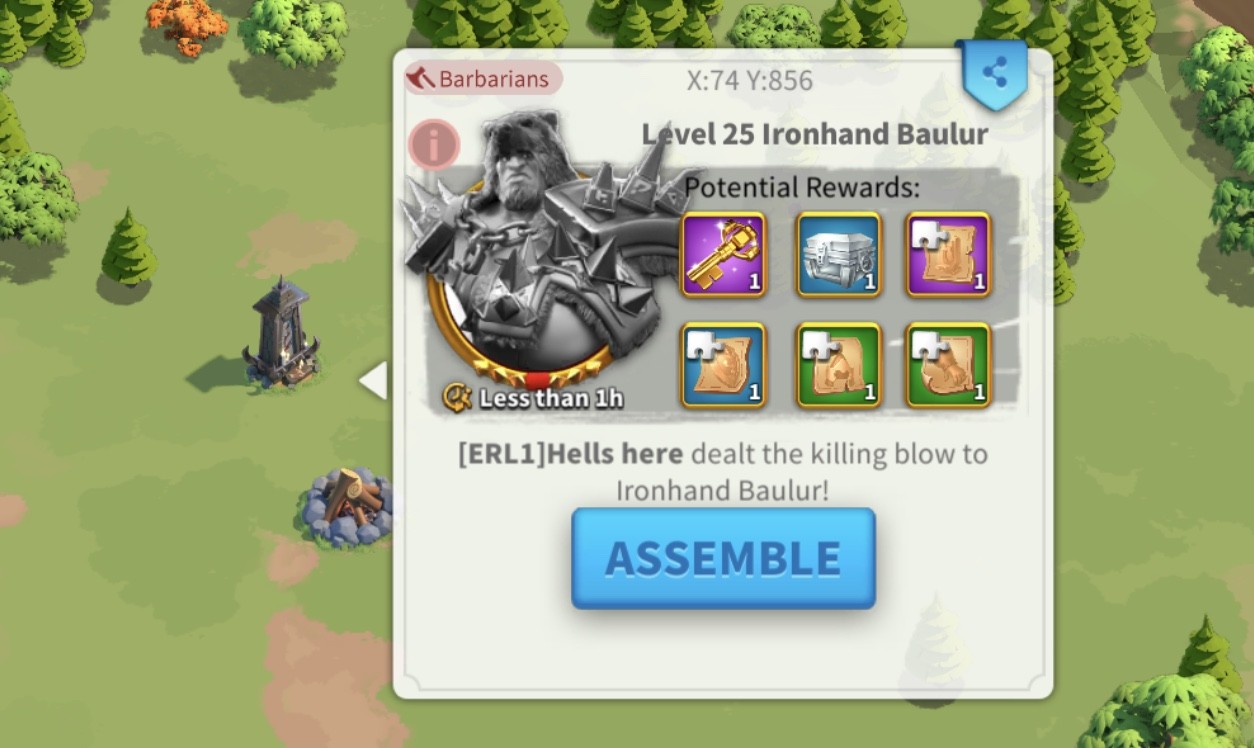 What are the Barbarian Camps?

Barbarian Structure in the Camps

If you want to defeat the barbarian keep which usually found in large barbarian camp and loot resources from it, you need to bring this arrow tower down first. What does this arrow tower do and why do we need to bring them down? Because if you do not bring it down, it will keep firing the arrow toward your armies and make you pay for it. Your mission is to destroy it as quickly as possible because it will deal a huge amount of damage and you definitely regret for not bring it down earlier.

Do you know that there is a way to counter these arrow towers? That way is to deploy the siege troops to attack it. The commander command this siege troop of yours should be a good conquering commander. I can name a few names for you in Rise of Kingdoms like Hannibal Barca, Julius Caesar, Baibars, and even Scipio Africanus which is a recommended starting commander for Free to play players. Let them lead your siege units and you will see destroy this arrow tower is not so hard. 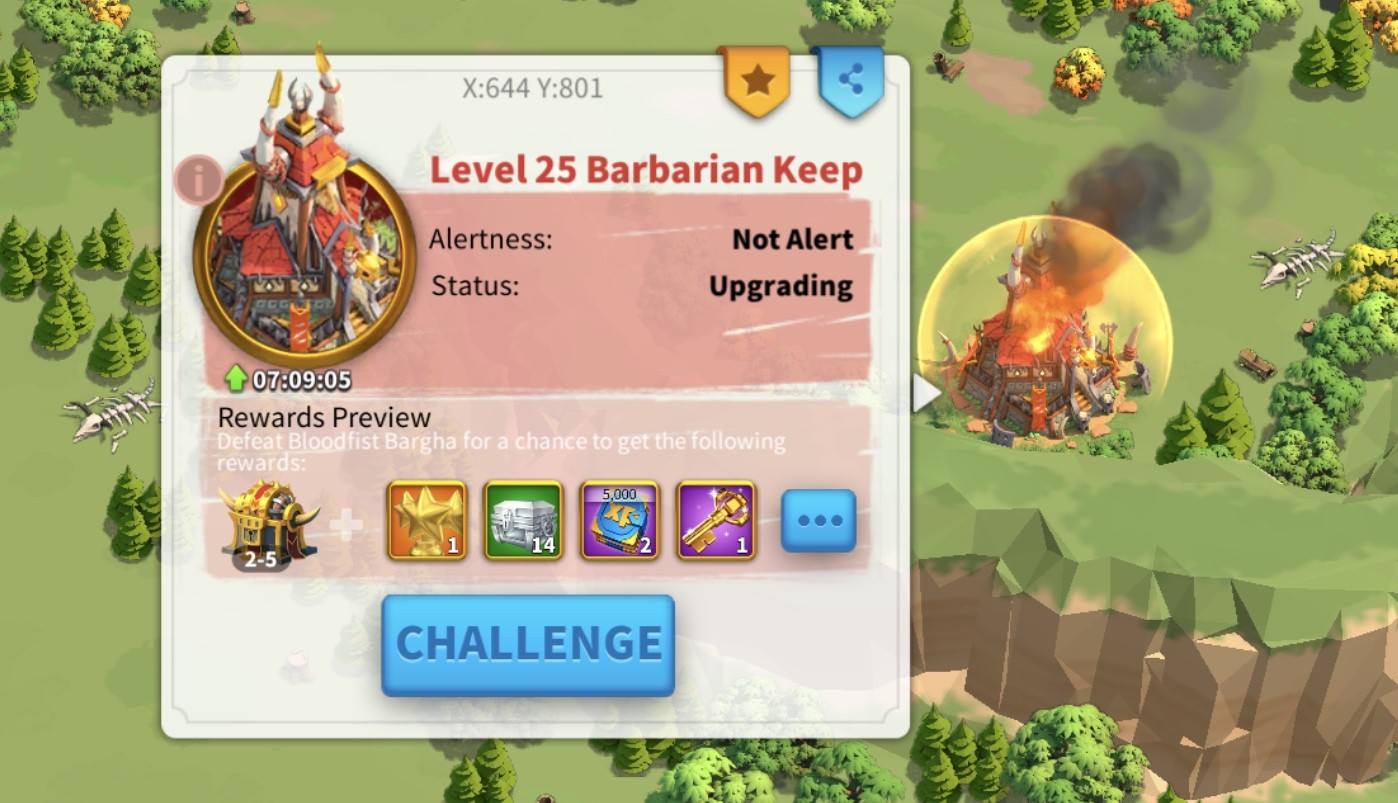 When you have finished the Barbarian Boss, the Keep level will start to increase. When the Keep is in this status, it will become undefeated and you cannot deal any damage to it anymore. When this phrase is completed, all the Barbarian Arrow Tower and barbarian units will be respawned and their level now to equal as the Keep level.

Troops in the Barbarian Keep

There are tons of different kinds of troops that are deployed to defend the Barbarian Keep. But turn out, these barbarian units are a wonderful destination for anyone who is starting to chain farm barbarian for events like Lohar’s Trial, Clarion Call, or just simply want to farm experience for the commander. But do not underestimate them because these units are much stronger and more dangerous than the normal barbarian that you can easily find near your city. So, if chain farm is your intention, you will need to deploy significant larger troops and stronger armies in order to achieve your goal in the most successful way. But, in this part, we will only guide you, show you, and talk about the troops that surround the camp to protect it from you.

Here is the picture of the barbarian who has responsibility for protecting the Barbarian Keep. What kind of soldier that they usually have in these troops? Many kinds of units like wolves, calvary. strong weapon and better armor and this condition make the barbarian units defending the Keep become much stronger and tougher for your armies to defeat them. Here is my recommendation for you if you want to defeat them and use them as a chain farm barbarian: you should deploy a big, large army with high tier troops because unlike the regular barbarian, these barbarian units will attack you as soon as they see you.

And the boss for the barbarian camp is Ironhand Baulur. When you raise the Keep alertness to 100%, he will be summoned and he will appear at all size. You will need significant troops to defeat him because he is very very strong. In order to defeat a level 25 boss with incredible power-packed with him, you will need at least 180,000 Tier 4 troops to bring him down.

But, the reward when you defeat him will not let you disappointed. What are these rewards? You will receive tons of golden keys, blueprint materials which you can use to craft a better, stronger gears in order to make your commander become stronger and of course, the rewards that are essential for you and you can find in many sources is action points recovery potion or starlight sculptures.

There are some different ways to make your combat become as effective as possible. The first thing you should consider is your commander and the talent tree. You should mix your leading commander between a peacekeeper commander and commander with powerful offensive commanders such as Cao Cao and Mehmed II who have a skill that can defeat multiple enemies at a same time. The second thing you should commander is to have at least 180,000 Tier 4 troops in your armies in order to maximize the defense abilities or attack damage from these troops. You are allowed to have support from your alliance members if you need to do that.

That’s is everything, governer. I really hope that you find my guide about the barbarian camp and keep helping you with your progression. Please feel free to drop any comment in the comment section below if you have any questions that want to have an answer from us. Happy ruling, governor.

There is something that you can not miss after a time playing Rise of Kingdoms, that is the Growth...
Read more

When talking about Rise of Kingdoms, there are many different opinions about it. But, many people will call it...
Read more
Subscribe
0 Comments
Inline Feedbacks
View all comments