Home Rise of Kingdoms Richard I 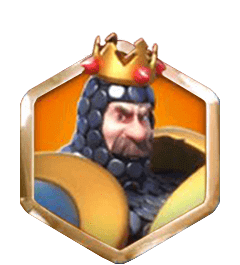 An instant guide to using Richard I and the best talent trees for him! One of the very first Legendary commanders you want to look at in Rise of Kingdoms.

Soul of the Crusaders:

Healing slightly wounded units in Richard’s army. Add a debuff for a maximum of 5 targets in the fan-shaped area. (Debuff feature decreases the damage and parade speed within 2 seconds.)

Hold him in 1-star level, then upgrade max skill 1. Should not upgrade him to 2 or 3 stars when you haven’t done max skill 1.

If you use a correct talent tree, Richard can heal 4300 troops maximum for once. Terrific!

You need to upgrade max skill 1 as quickly as possible. Do you know Richard 5000 can solo play with many 5-5-2-2 commanders?

Increase troops’ counterattack damage and damage reduction. This buff can be applied for every garrison when this leader is serving as a garrison commander.

Increase damage and defense for infantry.

A simple skill for infantry commander. It’s the reason why Richard should bring pure infantry to promote the whole strength.

Increase healing effects for the army and decrease damage of the watchtower.

Such a wonderful skill! Increasing healing ability for army to up to 30% means that in a war, you have an insane advantage.

This skill is valuable when attack and conqueror. The damage reduction of rival watchtower helps decrease maximum loss when attack because the damage of the watchtower is huge.

Reduce 5% every damage taken, rise 2% damage that infantry caused to cavalry. Besides, after every 10 seconds, decrease the march speed of the target to 50% in 5 seconds.

Infantry is slow so that when declining march speed’s enemy helps to balance maneuver between 2 parties. Helpful!

How should I use Richard I?

Pairings with Richard I

Richard + Charles: Infantry or mix troop. It’s one of the strongest couples in-game. Richard with Charles is a heavy couple. About the longterm game, it’s perfect choice. However, the disadvantage os this match is less damage.

Richard + Joan of Arc: Infantry or mix troop. It’s the best-tanking combo for group fights. In big battles, rival doesn’t consider tanking to be a goal. This will help Joan free, unlock her full potential of the buff skill.

Richard + Hannibal: Infantry or mix troop. It’s a good choice with many debuffs. Notice about this match, Richard is the main commander.

Richard can be matched with every commander, depend on your purpose on the battlefield. Good matches: Hannibal, El Cid, Cao Cao, Boudica, Joan, Belisarius, Hermann, Pelagius, Eulji and Cleopatra.

Best Talent Trees for Richard I

This is currently the best talent tree build for Richard I in Rise of Kingdoms. Best for any position of him in the game.

Richard 1 had been the king of England since 06/07/1189 until he died. He was renowned for the name Richard the Lionheart because of his fearlessness on the battlefield, also his extraordinary military leadership. Richard was a Catholicism leader in the third Crusadesand and gained the great victory from Islam head, Saladin. He was also famous for a religious king. Mentioning about Richard in Rise of Kingdoms, players consider him an incredible general with his amazing defensive ability. This article will show you how to play the first Richard the easiest way.

0
Below is the complete list of the best city layout designs you can use in Rise of Kingdoms right...
Read more
Subscribe
Login
0 Comments
Inline Feedbacks
View all comments