This following list will show you 10 common early-game mistakes that beginners usually make while playing Rise of Kingdoms!

These common mistakes will make you regret doing it later in the game. By making the right moves, it can help faster your progress during the early stage of the game. So it is your chance to break the cycle and get things right for the first time. 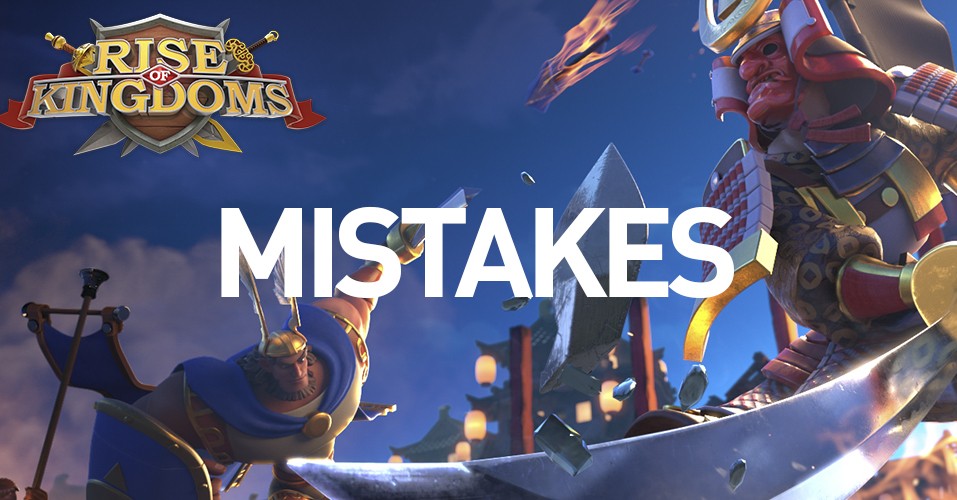 10 Common Mistakes in Rise of Kingdoms

One of the biggest mistakes in the early game that you could make is using Starlight Sculptures to upgrade your Commander’s level without understanding your civilization’s perk.

For example, your chosen civilization is Germany, which is specialized in cavalry (Germany’ perk increase cavalry attack by 5% and its special unit is Teutonic Knight), but your starting Commander is Hermann. Hermann is a good Commander, but he is specialized in Archer. So you may want to invest Starlight Sculptures in Commander, who has support skills for cavalry to utilize the perk bonus.

You should do some research about the civilization that you want to play, understand its perk so you can choose the right Commander to play around because you are going to play with them for quite a long time.

It is also one of the biggest mistakes in the early game. There are three branches in Commander talent, so sometimes you may invest points in all three branches, or focus a branch that not work well with that Commander’s skills. You can reset your Commander talent but it will cost 1000 gems, which is a lot of gems. You certainly don’t want to waste your precious gems on that.

Therefore, you need to decide what will your Commander do. Like a farming or fighting Commander. On this page, we have an entire list of Commanders with talent tree builds suggestion.

Before upgrade any point in the talent tree, you should plan what to do with your Commander first.

This mistake usually happens with some players who lucky enough to pull a Legendary Commander in the early game. So they choose that Commander as a Core and start to invest all their resources in its.

It isn’t good, you shouldn’t do this. But why?

Not having queues working all the time:

It is a huge mistake. It can slow your progress down in the early game. Incases you don’t know what are the queues, here are they:

Those queues should be working all the time. They will help stronger your kingdoms and faster your progression because time is one of the crucial factors in this game.

There is a Mysterious Merchant in Courier Station, which is available when your City Hall reaches level 6. The Mysterious Merchant offers items from the Shop for gems at a discount of 30% to 90% off the shop price, and sometimes you can buy items with food, wood, or stone.

But you don’t need to spend your gems to buy items at the shop yet. You should focus on upgrading your VIP to level 6 as soon as possible. Because at that level, you can unlock the 2nd  builder, which is very important, along with daily rewards and some bonuses.

Not buying the Legendary Commander pack – Writers of History:

By buying this pack, you will get 66,375 gems worth of items, which include:

You will get all of these above items at only 5$.

This special offer will appear when you pull a new Legendary Commander, and it lasts for 1 hour only. If you are a F2P player, it is ok to skip it. If you are willing to spend a little, you will not regret it when buying this pack.

Not joining any Alliance Early

In the beginning, there will be many players that don’t want or too lazy to join an Alliance. Or they don’t know which Alliances are right for them, so just decide to postpone it. But this is not fine at all, you will easily get attacked by other kingdoms once your protection shield goes off.

So you need to join an Alliance, any Alliance would be fine. You can join top alliances later once your kingdom becomes stronger.

By joining an Alliance, you will these following benefits:

Attacking other players/kingdoms in the early game:

Not focusing on upgrading your City Hall:

It is fine to upgrade small buildings like Farm, Lumber Mill, Quarry, or Goldmine, but your main priority should be the City Hall.

Before your City Hall reaching level 22, you should focus on upgrading the City Hall and all of the building requirements for the City Hall.

By reaching level 22, you will unlock a 5th march queue, which will extend your farming and fighting in the battlefield, along with unlocking more top tier technologies and strongest tier of units.

And while your City Hall building is upgrading, which usually takes lots of time, you can start to upgrade other buildings with 2nd builder.

Jumping is a special term in Rise of Kingdoms, which means that you can jump to another kingdom while your City Hall and all other buildings are at level 7.

Jumping can give a head start advantage in the early game. My suggestion is if you are new to the game, just ignore it and continue to explore Rise of Kingdoms.

When you create a new character, you will have 10 days to jump to another kingdom with a beginner teleport. Remember that once it is over 10 days, you won’t be able to jump. If your City Hall reaches level 8, you also lose the ability to jump. So make sure to prepare to jump on the 8th or 9th day.

Anything sounds familiar? Fix your mistakes and improve the Rise of Kingdoms gameplay from today!

How to Attack and Defend in RoK

0
Welcome to my guide: How to attack and defend in Rise of Kingdoms for beginners. The player base in Rise...
Read more

55 Must-Know Tips Before You Play Rise of Kingdoms

0
New to Rise of Kingdoms and you're only starting off? Don’t worry! I've placed together top 50+ best general...
Read more

0
In Rise of Kingdom, there are 11 civilizations to pick out and those that are chosen will have a...
Read more

Top 10 Commanders in Rise of Kingdoms

0
Do you guys still have some questions about the best meta commanders in Rise of Kingdom and the best...
Read more

How to Farm Book of Covenants for Castle

0
Farming Book of Covenants is hard in Rise of Kingdoms, particularly when you have to upgrade your Castle...
Read more

0
Are you new to Rise of Kingdoms? You don't know where to start? You wonder which is the best...
Read more
Subscribe
Login
0 Comments
Inline Feedbacks
View all comments