If you are looking for the best Archero Chapter 6 guide, you have come to the right place! 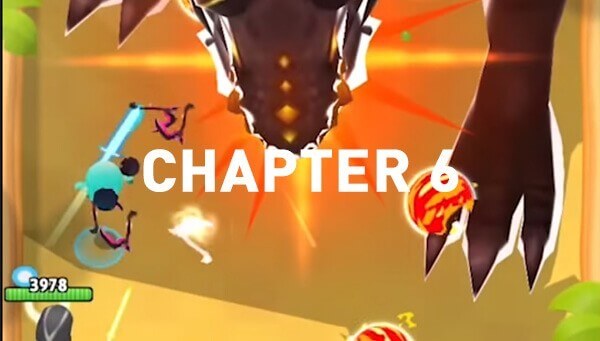 Firstly, you will need to be very active in case you don’t have any epic weapons. Besides, there’re a lot of ranged units at this level. Try to wipe out the wave within 15 seconds or you will have to deal with more creeps and projectiles, there will be obviously less room for you.

Because I do not own any blue weapons except Scythe so I have to use it. Its knockback attribute initiates some abnormal behaviors of creeps/bosses which somehow makes it harder to carry out the chapter.

Some others weapons might be more suitable to deal with this level.

It’s might be helpful to use Void Robe which can add 10% resistance to collision.

Which Rings to Use?

These are which complete your building progress.

Some equipment can totally be combined with another such as 2 Falcon rings and a Dagger.

Rings also can help increase attack speed. 2 serpent rings and vest of dexterity will increase dodge chance to 21% without dodge spell. Besides, Wolf rings provide +5% chance of crit, they could be paired with an Epic bow because of its function to add 50% crit damage.

Spirits: Don’t need to consider much because it’s not really helpful for completing the chapters.

Defensive Skills: you should try to have at least 2 in these skills: Wingman, Invincible star, Shield guard, Slow projectile.

Dodge: Becomes significant when its rate is 14% or higher. In case you don’t get any choice except have 3rd defensive skill, just do it.

Although Serpent rings are good, you shouldn’t fuse this blue serpent to epic. The reason is that you wouldn’t get 2 serpent rings along with a dodge attribute.

In case you have diagonal arrows. Try to stand beside the marks on the enemy’s position and all 3 shots will aim to this enemy, 2 times shooting can kill the enemy.

Walls are really helpful when combined with ricochet/piercing shot + bouncing walls, otherwise, they also can protect you from some projectiles so try to hide by walls.

At this stage, your attack power is quite weak because of your low hero level ( 4, 5 if you use smart ). Killing this boss is quite time-consuming. The Boss can release balls that can be divided into many small ones in many directions. You can dodge the attack by move sideways one or two steps. Getting trapped might be the main damage to you, try not to get it when the boss occurs in front of you.

The second easy boss to deal with in this chapter, the first is the final boss. It’s necessary to gather them together in the corner. The freezing attack can somehow irritate them. When dealing with these enemies you really need to run don’t just move 1-2 sidesteps. There’re 4-5 seconds for you between their charges, their aim lasts 1-2 seconds. Try to entice them to attack in one spot, you will get enough time to move to a safe position. After avoiding their plasma attack, repeat the process to continue baiting.

It does not require you to move a lot to deal with the Spirits. Just standing at the bottom and focusing on dodging to avoid the attacks. Once the mines appear, get away from them diagonally because you won’t know which direction they will go.

Right the time you get in the boss room, try to run to the position under his feet (left of you) feet and stand still there. You should dodge by moving up and down.

Choosing HP Boost whenever you are offered between HP Boost and Heal by an angel. Besides boosting your range of HP, HP Boost can restore a certain amount of your HP (about 600), while you can get about 1000hp healed from Heal but you don’t get any acquired abilities.

Smart: Essential if you get it before facing the first boss. If you have to choose between Smart and Not good abilities, take the option for Smart. Normally, you meet the first boss at level4, but smart can help you get in at level 5 if you acquire it ( 4 abilities + smart = 5 in total ). You also get a small plus that is level up heal (300hp if getting smart). It works in almost chapters excluding 7th.

Cross my finger! If you have any questions, feel free to ask.

0
Archero Talents are the permanent upgrades you can apply to all of your Heroes. The talents help you boost...
Read more

0
Below we have the tier list of the Best Archero Skills (Abilities). The list gives you a rough idea...
Read more

2
Looking for the best tips for farming Free Gems in Archero? Here you go! Dear Archers, Do you covet the lovely...
Read more

0
Best tips for defeating all 50 stages of the Archero Chapter 5 with ease! Some Helpful Chapter 5 Tips Invincibility:...
Read more

1
I really want to post this Archero Chapter 1 Guide to share some experiences with new players who were...
Read more

0
Best Archero Weapons Frequently Asked Questions Why does everyone think that Tornado is the best Archero weapon? Because of its abilities:...
Read more
Subscribe
Login
0 Comments
Inline Feedbacks
View all comments