Looking for the most up-to-date RAID: Shadow Legends Tier List? This is the best one you could ever find!

On this page, you will find a rough idea regarding the best champions in the game, as well as the tier list for each faction and specific game-modes in RAID! 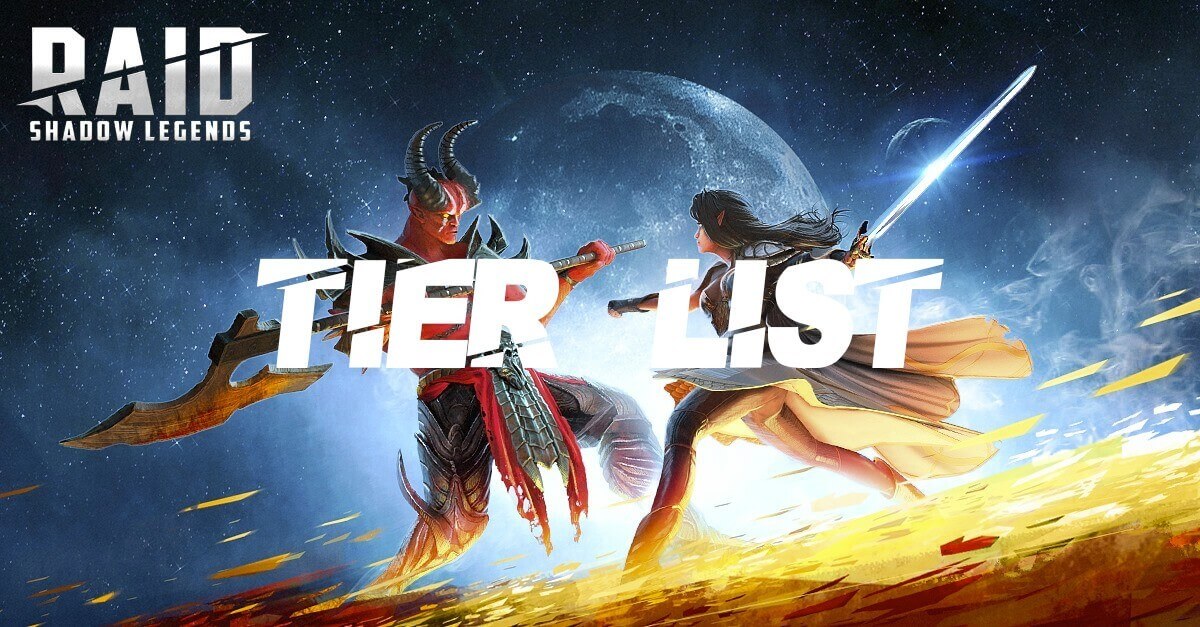 All champion tier lists will be put into different categories based on their factions. Specific game-modes will be also mentioned.

One of the finest games ever created by the master himself, RAID: Shadow Legends has been able to generate a massive fan base in a limited timeframe. First glance at the game and you will be able to figure out the high-quality graphics and design ideas that have integrated along with mechanics that are worth praising. Although the reason behind its huge success is not just the traits mentioned above but a plethora of things that have been utilized to make this game what it is today.

Being a renowned gaming developing company, Plarium has been able to provide the world with a number of exciting games that have given the company a high reputation. Keeping their reputation intact, even this time they have managed to come up with something that has not just help their popularity but has created an even bigger circle of gamers. With games like Vikings, soldier, terminator Genisys, Total domination, etc. there’s no way they are going down in the near future. Their headquarter sits in Herzilya but have a number of services to Russia, US, Ukraine and even in the United Kingdom.

Know who are the best Champions with the Tier List!

As the game commences, you are introduced to the entire idea of the game RAID: Shadow Legends and what can you expect out of it. You are taken through an entire tutorial which takes hardly a few minutes. You get to meet the four champions that are the protagonists of the game and you are pair up with them and fight battles. You get to kill people and fight combats like a hero. However, as the proceeds, a dragon shows up and kills your champions and you are left alone to handle the rest of the game. You might grow fond of your companions but keeping a strong heart is what will take you further.

The world where the entire game is based is known as Teleria that is being destroyed by evil forces and their leader who wants to spread darkness and sadness all over the place through war and crime. The evil forces have created a so-called shadow from the eastern end and the player that will be you have to help the arbiter to save the world from falling apart. The redhead has been doing her part but her energy and power are fading away and she needs a strong companion to join with her in the battle. The Arbiter also offers to restore just one of the four champions that you have to choose and their soul will be remade.

The moment you choose the champion that you want to restore, you are taken to the base which is called the Bastion. Here, you are required to plan the entire battle and the actions that you will have to take in order to defeat the evil. Like any other game, you will be arranging your army, your defenses, and improve your skills. While doing this, you will get to learn a unique but very important that is summoning heroes that will prove very useful to you in the coming battle. You can summon them using the Mystery Shards at the portal.

There are a number of champions that you will get to meet and fight along on this battlefield. Some of them are elves, barbarians, Lizardmen, dark elves, orcs, revenant, etc.  You get to play different kinds of battles in the game such as Dungeons, Arena, faction wars, Campaigns, etc. And it is the main idea why we create this Tier List for RAID: Shadow Legends so that everyone can easily see what are the best Champions for each kind of mode in the game!

Once you are done choosing the champion you are going to use first, you are taken to your first battle of the game which will be the beginning of the campaign battle. The battle that you fight would be against King Tayba that was once a very noble king but the shadow and darkness have fallen upon him and his men. You have to defeat his kingdom to get them on your side. When you dig deeper in between the battle, you get to find out the number of treaties and rules that the king had broken and is now imposing high taxes and exploiting people of his own kingdom. On seeing all this, the arbiter asks you to find out the hidden reason behind such turn of events and what made such a noble king turn to darkness.

In order to do this, you will have to enter the castle of the king and raid each and every corner of the place. On your raid, you will meet a number of monsters and scary creatures that will try to kill you and try their best to not let you move forward. As you proceed, you also meet the bosses and reach a bit closer to the truth. The battles that you indulge in are exhausting and will take time to get though. The mechanics of the game are what you will be required to understand.

Graphics and visuals being one of the strongest points of the game attract the most gamers. The storyline if a bit different and would take time to understand. However, once you get the hang of it, you are sure to enjoy it. The camera movement of the game is also smooth so that you get to enjoy an even better view of the entire game. There’s so much to this game that is beyond description. To get the maximum idea about it, trying it is the best option for you.

When was the last time this was updated? I’m a new player and am trying to see how good my characters are by comparing their ranking on different tier lists

It’s pretty fresh. We updated it in the last update :).

Great resource. But could use a legend re: your rating system- mainly what do “S” and “SS” mean as ratings?

you should explain tiers, because for me green means good and red bad. also i can see some champ with b and c everywhere but with A overall, how ?

An overall because there are some other game modes not mentioned here. Can you point out some specific Heroes you want to have the explanation please? Sorry about the late reply, our comment system got some issues.

There aren’t specific heroes that need explained, it’s your rating system that needs an explanation on top of the page. An index of what A, B, C, D, S, SS, etc mean.

Missing many heroes now. Would appreciate an update!
Also, what is CB?? And -T6 and +T6??

because its a HP support hero, basiclly has heaps of hp with the right set ( very tanky)

dumb question but what does S and SS mean? In the U.S. green would usually indicate best but seems that maybe Red/Orange is the coloring for better choices? Thanks!

Where is tormin the cold ?

I know I am missing this but I can not find the answer. What tells me a FORCE or a SPIRIT champion? Is it the Affinity they belong to?

Why does Gogorab have two different entries with different ratings for faction and clan boss?

Updated! Thank you a lot buddy!

Thank you for this list! I am a new player and I am trying to figure out which of my heroes are worthy of leveling and which are not. This list will definitely help. Great job!

What does the a,b, s and ss stand for

will there be an update with new champions?

Yes, we are working on it right now!

anyway, good luck in your work and thanks for your work!