In RAID: Shadow Legends, Dungeons are the place where you can find gears, master scrolls, and ascension potions.

Except for Spider Boss, each dungeon raid requires you to face two waves of enemies before finally facing the boss. There isn’t any strategy for clearing the first 2 waves, you simply need to be strong enough.

In general, you want to have as many buffs and debuffs as you can while raiding Dungeon bosses in Raid: Shadow Legends. Decrease their DEF to increase your damage output, slow them down to get more damage, counter-attack buffs allow you to attack the boss a lot more (since they all have only AoE skills). The counter-attack buff is also very good in Dungeons because there are times your Champions attack the normal mobs instead of the main boss. 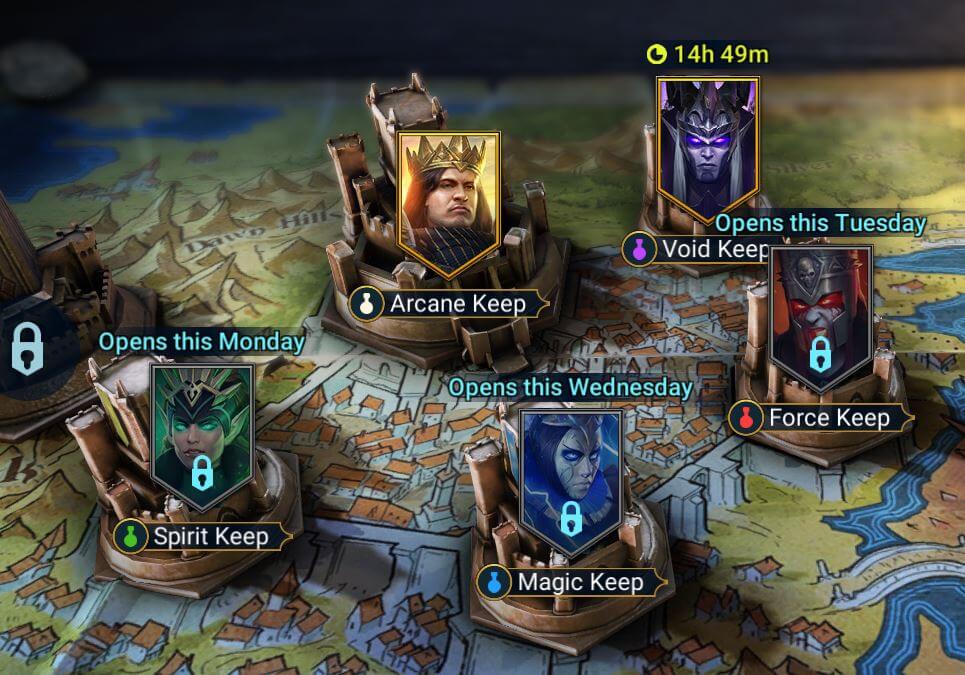 Potions are for upgrading and ascending Champions in RAID: Shadow Legends.

Ascending only boosts the base stats just a little.

Some Champions have their abilities improved and/or unlocked at 3 stars of ascension.

There are some stats that can only be increased at 6-star-ascension: Accuracy, Resistance, Crit Damage, etc.

Ascending a Champion to 3✭ if it improves or unlocks his/her ability. Otherwise, don’t do that until you are able to ascend them to 5✭. 4✭ is a huge waste of energy because it only gives a little boost so don’t focus on doing that.

With the exception of Arcane Keep, each other Potion Dungeon unlocks on a certain day of the week:

In each potion dungeon, all the enemies, including the boss, have the same affinity. The boss of the Arcane Keep is Void affinity and the first 2 waves of mobs have different affinities.

There are 4 dungeons that drop Gears in RAID: Shadow Legends:

Note that 6✭ Gears are actually not available in the game yet but will be in one day.

In RAID: Shadow Legends, players can fuse, or combine Champions to get the more powerful & higher rarity ones....
Read more

What Are The Best Masteries in RAID: Shadow Legends?