Here are the best set combos in RAID: Shadow Legends for your Champions! 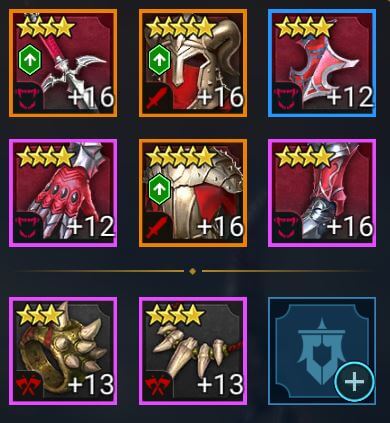 ➡️ Speed – Speed – Speed: Equipping 3 Speed sets is good for support Champions, especially the ones who can boost your team Turn Meter, very helpful in Arena battles and Clan Boss (multi hits) after you get Giant Slayer.

➡️ Vampire Set + Other: This is the go-to set for almost all damage dealers in RAID: Shadow Legends until you start specializing your Champions for different activities in the game.\

➡️ Shield Set + Other: This is a very typical build for all support Champions and the ones that have high HP. It is very helpful in Campaign as well for getting 3⭐️ because the shield renews every round. However, you will mostly see this combo in Arena and top tier Dungeons where it gives you more DPS.

➡️ Toxic Set + Speed Set: Great combo for all Clan Boss battles before you get the Giant Slayer. This combo gives you a lot of free damage. The toxic only triggers once per skill cast so there is no bonus for multi-hit Champions. You can boost the damage output by using Weaken debuff in your team. It also gains benefits from Speed buffs.

➡️ Damage/Attack/Crit Chance Sets – This is the usual pick for all Damage Dealers in RAID: Shadow Legends and your farming Champions at the end game.

Most of the other gear sets should only be used when you want to boost the specific stats of your Champions, their strong points. For example, you want to put counter attack ability on Skullcrown or Vrask. Regeneration set is good for Reindeer and other high HP Champions.

Also, do note that the set procs are separate from abilities and masteries. Counterattack set can work perfectly with the counterattack mastery.

The set effects do not require accuracy and cannot be resisted by the enemy Champions.